Do squirrels eat birds and their babies? The answer to this question is yes, but not all squirrels will eat birds.

On very rare occasions, both the American red squirrel and Eastern gray squirrel will hunt and eat birds.

In this blog post, we’ll explore why and how often these animals hunt and eat birds.

Squirrels are tiny, rat-like rodents with bushy tails that are frequently seen scampering in parks and your backyard.

They’re generally regarded as adorable and non-harmful, although squirrels have been known to attack birds.

Sometimes, squirrels are irritated by avian intruders; other times, they’re merely annoyed. However, there have been reports of hungry squirrels attacking songbirds and stealing their eggs for food.

Regardless of the reason, a squirrel attack can be dangerous or even deadly to a bird.

If a sufficiently large or aggressive bird is attacked by a squirrel, it stands more of a chance against its assailant.

If you see a squirrel attacking a bird, your best course of action is to contact your local animal control department for assistance.

Squirrels are well-known for eating nuts and seeds, but what else do these furry animals consume?

Most people would be shocked to learn that squirrels are opportunistic eaters who will eat whatever food is accessible.

Squirrels will also consume insects, small rodents, and even birds in addition to vegetation.

It’s easy to believe that a bird may be too big for a squirrel to consume, but don’t let their stature deceive you.

Remember the next time you see a squirrel scurrying about – they might be seeking more than just food.

Why Do Squirrels Eat Birds? 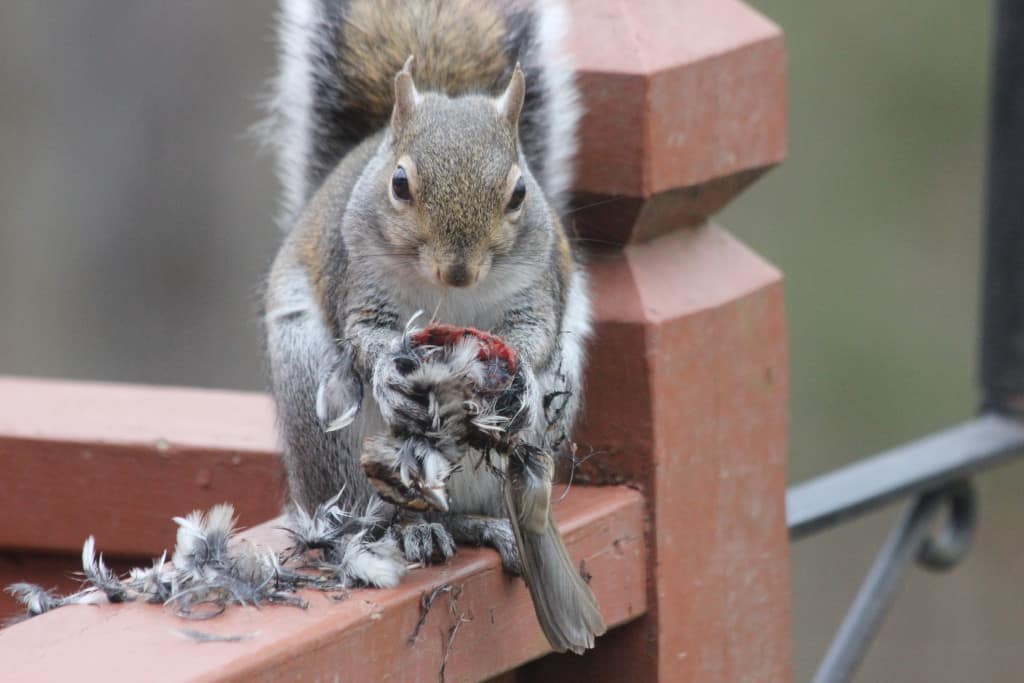 Why do some squirrels eat birds? The answer may surprise you. The major reason is that birds and their eggs are high in protein.

This is important when young squirrels need protein and fat to grow as well as other nutrients they needed.

Birds nest in trees, so squirrels have an advantage when it comes to attacking them.

Not every squirrel is interested in hunting birds though.

Some creatures prefer a diet of nuts and seeds instead. But there exist several reasons why others find them delectable.

Despite the fact that many people hold squirrels responsible for baby birds dying, there is no supporting evidence.

Some experts believe that squirrels consume baby birds and bird eggs from their nests on rare occasions, but this is not correct that they do it on a regular basis.

Squirrels are predators by nature, yet experts will tell you that baby birds are more likely to be eaten by bigger predators like cats and eagles.

When you notice a squirrel in your yard, you don’t have to be concerned about it harming hatchling birds in their nests.

As a bird lover, it is discouraging to find a dead bird in your backyard.

While there are many causes of death, you may wonder whether squirrels eat dead birds when you see squirrels chasing around in your backyard.

According to several studies, squirrels do eat dead birds. It also found that squirrels prefer to eat certain parts of the bird, including the head, wings, and tail.

Although it is not certain why squirrels eat dead birds, it may be this is an easy source of food.

Eventually, all creatures must die, and many will be eaten by predators. It’s a sad but inevitable part of nature.

Do Squirrels Kill Birds To Eat?

Squirrels usually go after smaller birds. Adult birds or those who are larger than squirrels are not among their targets.

In reality, studies have shown that squirrels prefer nuts and seeds, and they only kill birds when their preferred food is unavailable.

Squirrels are omnivores with a broad diet. They’re one of the most adaptable species on the planet.

Although it may seem cruel for squirrels to kill birds, the reality is they must do so when other food sources are scarce.

While squirrels generally go for nuts and seeds, they will eat anything else if necessary.

This includes eggs, which many species of squirrel love.

In fact, these small mammals have been known to rob bird nests for their next meal. Understandably, this can be bothersome for bird enthusiasts; however, it must be kept in mind that the creatures are only acting on instinct.

If they didn’t consume eggs, death by starvation would be a real possibility.

What Kinds Of Squirrels Eat Birds?

Although many people think all squirrels solely eat plants, some varieties occasionally like to nibble on bird eggs or nestlings.

The two most frequent types of squirrels that consume birds are American red and Eastern gray squirrels.

Although it may not seem like a big deal if squirrels take a few mouthfuls of birds here and there, small predators can have sizable negative effects on bird populations if their raiding goes unchecked.

Fortunately, there are several methods we can use to prevent squirrels from getting into bird nests, like installing baffles or removing sources of food and shelter.

If we want wild birds to keep bringing joy to our lives for years down the road, taking steps to protect them is crucial.

Several studies have shown that squirrels do in fact eat birds and their babies.

While the motives for consuming dead birds are unclear, it is believed that they simply see them as an easy source of food.

In rare cases, however, squirrels have been known to kill and eat small live birds. They generally don’t target adult-sized birds or those that are larger than themselves though. 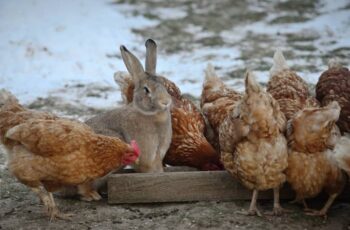 Whether you have both rabbits and chickens, and they reside … Squirrels are usually known to eat nuts, seeds, fruits, and …