Though chipmunks are more of quiet rodents but make some sounds. Their sound is very similar to birds and most people mistake with birds sounds especially those who haven’t seen and heard chipmunks before. Similar to squirrels which make different sounds, chipmunks also make unique sounds. They are not really much different from squirrels and seems like squirrel babies. You might have heard chipmunks but walked by assuming they are birds and wonder what sounds do chipmunks make, when, and why?

Chipmunks make shrill chipping (chip-chip) sounds for ground predators like cats or dogs and make cluk-cluks or chuck-chucks sounds from flying predators. They also make a twittering sound in the run when you or a predator pursues or chases them. Most times, they continue the sound even after the predator is not there and when one started, other will follow and make the sound with it. They make these sounds to alarm each other of the threat, chattering, warning, protecting and defending territory, nests, food source, and in opposition to each other or predator.

They are cuter and endearing than squirrels. In fact, they are also less noisy than squirrels but makes certain sounds, just like squirrel make sounds, but when what and why chipmunks do make sounds. Chipmunks are very similar but smaller than squirrel rodents and they use nuts and seeds and are mostly seen in North America. But that isn’t the only place they live, they are spread all over the country, from south to parts of Florida with the exception of a few freezing and hot states. They aren’t as difficult to make pets as beavers are, here’s why.

When What & Why Chipmunks Does Make Sounds?

Although chipmunks are mostly quiet rodents like rats, that doesn’t mean they don’t make noise or sounds at all. They make sounds and noise in certain situations but aren’t very differentiable from birds. Also, they make chip-chip or cluck-clucks sounds which they are well known for. They are small clever rodents and make these sounds for a purpose. They make consistent and inconsistent sounds. However, they don’t have lots of sounds like raccoons but do have some prominent sounds for communicating, alarm, warn, protect, and defend from predators and each other.

As far as chipmunks are pretty similar to squirrels, unlike squirrels, they make and live in underground-burrows (mostly in winter) just like prairie dogs that kiss each other. They travel alone and also don’t care about each other. They collect, store and stockpile food in their burrow at the end of the summer and fall and use it and hibernate in winter. And just like raccoons, when the babies born up, the male chipmunks tend to leave them alone to the mother and step away from them. But when there’s a threat and the mother or babies cry screams or moans, they will help and defend from the predator despite they had left them. Now, what sound does a chipmunk make? Here’s the answer.

Why Do Chipmunks Chirp? Is it for Ground Predators?

Chipmunks make two types of sounds for the ground and aerial predator which they use to alert each other of the predator. They are often out in the day for food and watch for predators. If there’s a cat, dog, squirrel, or any other threat from the ground, chipmunks will make high-pitched shrill chipping or chirping sounds just like squirrels and birds. And due to their size and defenseless, they do have lots of predators.

If you step into the vicinity, they will make the sound, alarming other chippies of the threat. As a result, chipmunk makes chipping or chriping sound for ground predators.

Why Do Chipmunks Cluck? Is it For Aerial Predators?

Chipmunks save easily and funnily themselves jumping and climbing from ground predators to the tree, but it’s different and more difficult in aerial predators. That’s probably not like how raccoons jump from height but it’s like that. The aerial predators can not only reach them up on the trees, but also are pretty quick and sharp to spot the prey on the ground.

Chipmunks will make noisy cluk-cluk or chuck chuck sound for aerial predators like, when there’s an owl, hawk, or any other aerial predator. It’s soft at first, but will get noisy when the predator is near or will attack and in high-threat. It will become high-pitched and shirl chip-chips or chirp-chirps in the threatening or deadly situation. They also use this sound to warn the predator to leave the territory.

You may call chipmunks a species of red squirrels, because they are also very territorial. That means, they set a range of territory for themselves and protect it from predators or unknown chipmunks. If they’ve made their nest in your yard, you may probably know that is where the circle of their territory is. So if there’s someone, the chipmunk makes chirp-trill sound for defending their territory which is their territory calls. Their territory range is from 15 – 20 meters.

While chipmunks are harmless and don’t have many things to defend themselves, they will warn and try to protect their territory. If there’s a rival chipmunk, they will probably fight and protect it from. If there are some other powerful predators, they will make the sounds accordingly, hide and warn it of leaving the area, and fights in some cases. They do their best to protect their territory, food source, family, and relatives. Most importantly their nest which is located underground and can be easily accessed. That’s the most important place for them and that’s where they, their babies and everyone is mostly there and even hides from a predator in a threat.

When they are conscious of a predator or other chipmunks or animals, chipmunks will make noisy cluk-cluk, chuck-chuck sound to alert, warn, scare and fool the predator. They will simply do more than one message or call. If the predator isn’t leaving and instead is willing to hunt chipmunks, they will make a higher-pitched, shrill and chips sound noisily and continuously. Often, they make burrows and capture a place as it’s territory. When other chipmunks will come into territory, they will make chip-trill sound first alarming other but if it doesn’t seem to be going out, they will conflict with each other and so they start making noisy sound and fight.

But that’s not the only case they make sound or fight over. They do a brutal fight over food source or protecting their food when one of the chipmunks would attempt to steal their stored food, especially in autumn when they stockpile food for winter.

You’ll hear this sound when you or any other animal which steps into their territory. Try this and you will hear the results!

Chipmunks have two mating seasons which are from early spring from March to early April and again from early June to mid-July. Which is when they search and make sounds and mate with female chipmunks. They seem to be in a group with other chipmunks, but they don’t really love to and that’s why they usually spent alone. And they only socially appear in the mating season.

Chipmunks make soft chirp-chirps and chips-chips mating calls a little different from a noisy chip or cluck sound of startle. They make this sound when chases or spotted a female chipmunk. The female will be separated of the male chipmunks after mating and will nourish the litters herself alone.

Another sound which chipmunks are really familiar of is low-pitched trill sounds or startle calls which they use when they are on the run from a predator or threat. While they make different sounds for ground and aerial predators, but those are when they are standing position. If the predator chases or they are running away and they are on the run they will make noisy ‘Trill’ or ‘Shrill’ sounds. It’s very noisy and severe that alerts everyone of the predator.

You can easily hear and predict the chipmunk being followed by a predator when they make this sounds. While they are somewhat safe from ground predators, due to they are fast and would easily climb onto a tree but it’s very difficult to escape from a aeiral predator. Aerial predator pursues and chases everywhere and sometimes even inside their burrows where they hide in a threat. They don’t have much to defend themselves but make sound, alert, run and hide from the predator. However, they will make calls and sounds from the time they would spot a predator just like prairie dogs. You can listen and notice a predator from the situation.

Chipmunks are not limited to sounds only, in fact, they do communicate with body language with other chipmunks or predators sometimes. With large ears, big eyes, shaky tail, and naughty activities, they send aggressive and warning signals easily to its rival. Similar to what reasons and how squirrels chase each other, they also first make signals and then chases each other for maintaining territory and dominance, food source, burrows, and showing power.

Some Interesting Facts About Chipmunks

As cute as chipmunks are, they are also very interesting.

How to Get Rid of Chipmunks?

Chipmunks are destructive and some people take it as pests. Whether they make noise or have done some destruction, you can get rid of them in two main ways. First shooting, and without shooting. You can only shoot chipmunks if they’ve damaged your property with a special shooting permit from the wildlife department. Better than that, you can get rid them off without shooting. It’s completley easy and doesn’t need alot to do. No need of permit, with less time and effort and with the system in place, they will automatically get the job done. That’s how easy it is.

Here’s how to do this.

Another way you can get rid of chipmunks.

Just like squirrels, chipmunk makes soft and noisy sounds. They have many similarities with squirrels, but few differences. They sound shrill, chip, chip, cluk cluk and trill and use it differently for predators. In fact, they use this sound also for mating but that’s a little softer. They also use this sound to warn each other of their territory, food source, stored food and of the predator. Despite there sounds, they also use their body language to send signals to each other. They don’t produce scent, but sniff each other directly not from smelling.

They are destructive like squirrels and can be disturbing and distracting, and make noise. You can get rid of chipmunks with the same tips you do to get rid of squirrels. The most effective thing to do is spreading red hot peppers around your yard, but there are also other tips and ways to accomplish with it.

With their furry tails and chubby cheeks, squirrels are often … 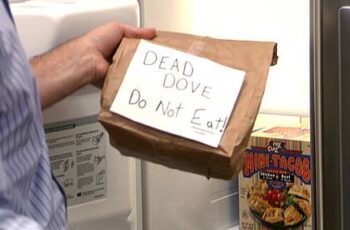 While “Dead Dove Do Not Eat” seems to have a …