From Asia to America to Europe, toads can be found almost anywhere and their range seems to be expanding. Like any animal, toads produce waste that must be disposed of. However, what does toad poop actually looks like?

Toad poop are small, dark pellets and are generally dry and soft to the touch. It looks shiny, wet and sticky when its fresh but quickly becomes smaller and and dries up after a few minutes. Toads generally defecate once every day or two and their poop is usually not too smelly. If you find a small dark black or brown poop in your yard, it’s likely that a toad has been visiting your property to look for food or shelter.

Toads are fairly small amphibians that have dry, leathery skin and pointed noses. They typically have short legs and round bodies, and many species have dark spots or patches on their backs

Most toads are nocturnal animals and spend the day hiding in burrows or under rocks. They emerge at night to hunt for insects. oads have long, sticky tongues that they use to catch prey. They also have large, round eyes that help them see in the dark. Toads are excellent jumpers and can cover a surprisingly long distance in a single leap.

Some species of toad can also produce toxins that make them unpalatable to predators.

Toad poop is generally brown or black and very small in size. It is shaped like pellets or pebbles. It is also difficult to see due to its blended in color with the surrounding leaves or ground. When dried, toad poop can resemble coffee grounds. Overall, toad poop is not much different than other animal feces; however, their diet does contribute to its unique appearance.

Toads typically eat insects, so their feces is usually composed of insect exoskeletons and other indigestible material which makes their poop a glossy sheen. If you see something that looks like toad poop, chances are it probably is! 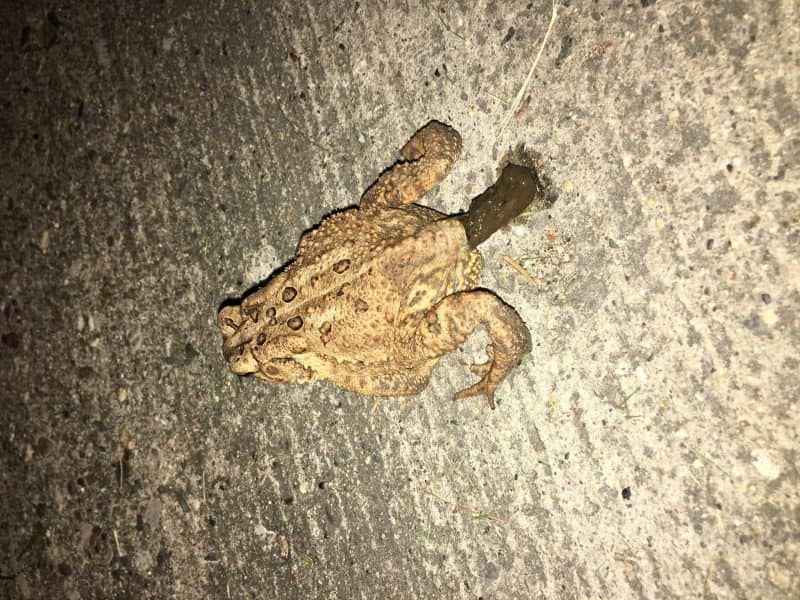 When it comes to the subject of pee, most amphibians do not pee and they only poop or pee with poop together. However, do toad pee, what does it look like and why do they pee when they are picked by anyone?

Yes, toads unlike most amphibians pee and poop both seprately. In most cases, it is clear and yellow in color, with a frothy consistency. This froth is caused by the Toad’s secretion of uric acid, which helps to break down their prey. Toads produce this unusual-looking urine by mixing it with toxins that they secrete from their skin.

Interestingly, toad pees when its held either by humans or any other animal. When toads are threatened or endangered, they will pee out in order to escape from the predator including humans.

What Is The Size of Toad Poop?

On average, toad poop is about 60 – 70 millimeter in size. While this may seem small, it is actually quite large relative to their body size considering they are only 2 – 3 inches in size. In fact, their small size is one of the things that make them such good animals to have around your garden.

And, because they produce lots of waste, they are likely than other animals to spread disease. Not only that, their poop is also relatively smelly, not as much as dogs or other large animals but still. This is because toads secrete a foul-smelling substance from their skin that helps to deter predators. 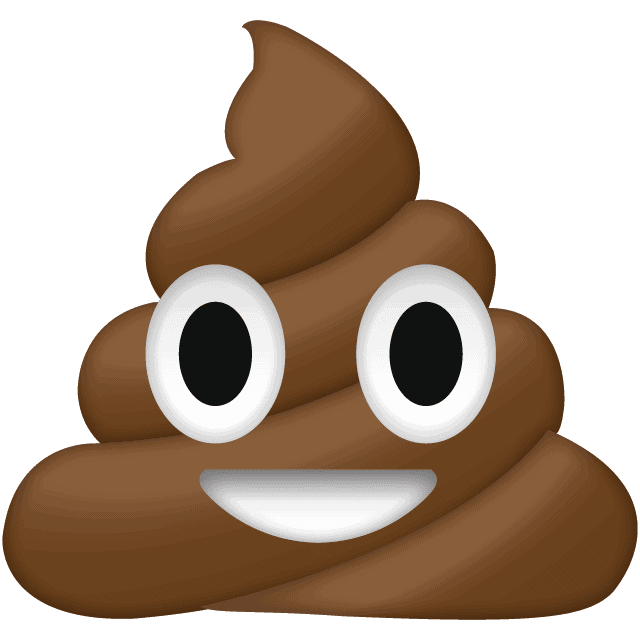 What Does Toad Poop Smell Like? Is It Smelly?

While the smell of toad poop might not be pleasant to us, what does toad poop really smell like?

To understand the scent of toad poop, we first need to understand what toads eat. Toads are mostly carnivorous, and their diet consists mostly of insects. Their intestines are relatively short, which means that they don’t have a lot of time to break down their food before they excrete it.

This results in a rather smelly substance. In addition, toads secrete a waxy substance called guanine, which helps them to absorb water and prevent dehydration. Guanine has a strong, ammonia-like odor that contributes to the overall stench of toad poop.

Overall, toad poop tends to have a strong, unique odor that is not particularly pleasant. However, it is not considered harmful to humans or animals.

So next time you step in toad poop, remember that it’s not just the insects that they’ve eaten that are responsible for the smell. It’s also the guanine that they secrete to stay hydrated. Either way, it’s best to wash your hands thoroughly after coming into contact with toad poop!

Where Is Toad Poop Found?

While toads mostly live near lakes, ponds and rivers, their poop can also be found there. However, when it comes to urban areas, toad poop, or scat, is often found in gardens, along pathways, or near water sources. Although toads skins are dry unlike frogs, they still live in a moist envoirment for ample opportunities for hunting and foraging.

Toads primarily eat insects, so their poop is usually full of the exoskeletons of beetles, crickets, and other small invertebrates. While toad poop may not be the most pleasant sight, it is actually a valuable source of nutrients for plants and gardens. The high concentration of nitrogen in toad scat helps to encourage plant growth, making it an ideal fertilizer for flower beds and vegetable gardens. 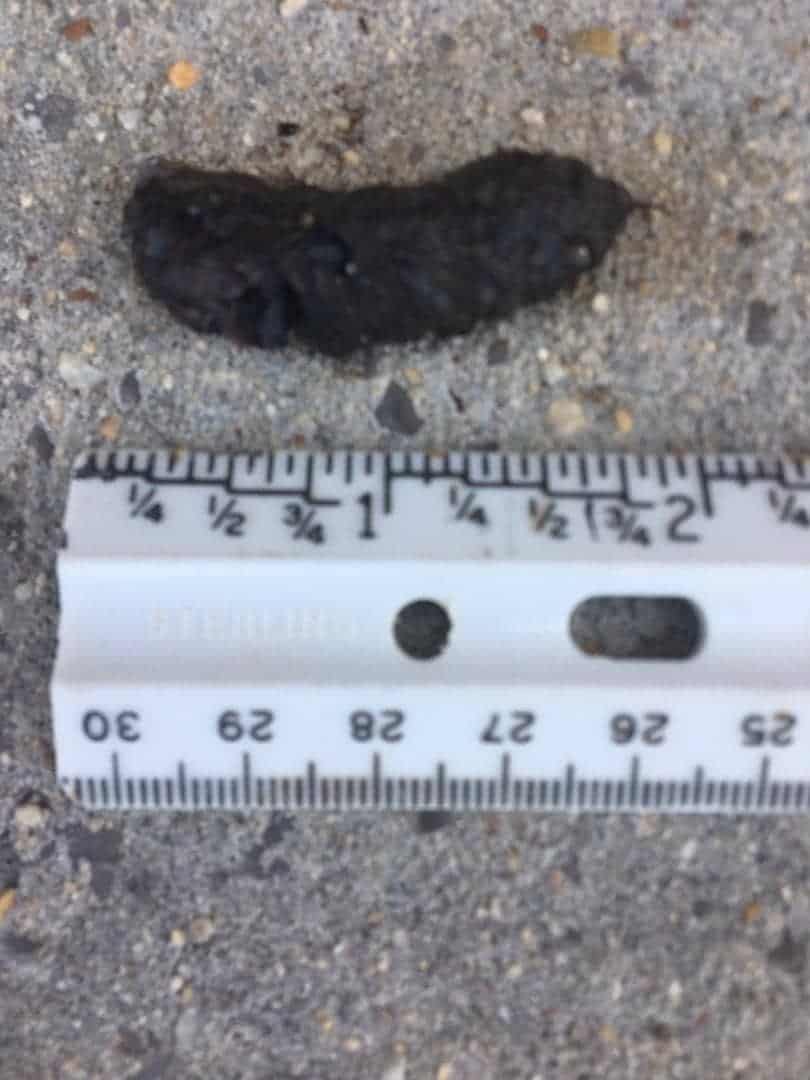 Why Do Toad Pee When Picked?

When you pick up a toad, you might notice that it secretes a milky-white substance from the parotoid glands. While this might gross you out, there’s actually a good reason for why toads do this. This substance contains toxins that can deter predators, and it also helps to keep the toad’s skin moist.

The act of peeing on a predator can startle them and give the toad a chance to escape. So next time you see a toad secreting this substance, remember that it’s just trying to stay alive!

What To Do If You Found A Toad Poop?

Toads are great for your garden. They help to eat insects and other pests that can help your plants. However, toads also produce a lot of waste which can cause disease. If you find a toad poop in your garden or anywhere in the house, the best thing to do is to clean it up.

Toad waste can contain harmful bacteria that can cause disease in humans and animals. Therefore, it’s important to remove any toad waste from your property as soon as possible.

How to Clean Toad Poop Completely?

The best way to clean up toad poop is to use a shovel or other tool to scoop it up and dispose of it in the trash. Alternatively, you can dilute the waste with water and spray it away with a hose. Whichever method you choose, just be sure to wash your hands thoroughly after cleaning up any toad waste. 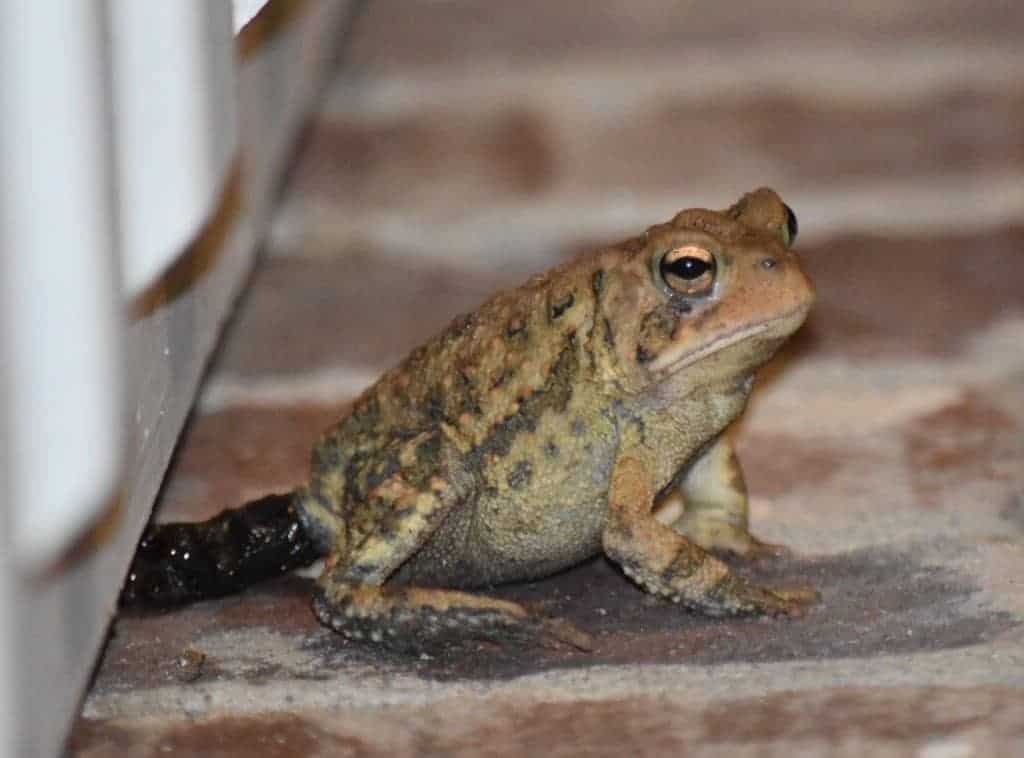 What is The Difference Between Frogs and Toads?

While toads are a family of frogs, there are some slight differences. Frogs and toads may look similar, but there are several key differences between these two amphibians.

For starters, frogs tend to have smooth, moist skin, while toads have dry, bumpy skin. Frogs also typically have long legs that allow them to jump great distances, while toads have shorter legs that are better suited for walking and crawling. In addition, frogs tend to live near ponds and streams, while toads are more likely to be found in dryer areas such as forests and fields. Finally, frogs typically eat insects, while toads primarily eat small mammals such as mice. While frogs and toads may share some similarities, they are actually quite different creatures.

We all know that poop is icky. But is it dangerous? The short answer is yes, toad poop can be dangerous.

Toads are often considered to be harmless, even cute, creatures. However, what many people don’t realize is that toad poop can actually be quite dangerous. Toads secrete a substance known as bufotoxins, which can cause a different problems if it comes into contact with human skin. In some cases, it can cause irritation and swelling. In more severe cases, it can lead to nausea, vomiting, and even seizures. As a result, it’s important to exercise caution when around toads, especially if you have young children or pets who might be tempted to put their hands or mouths in the toad’s habitat.

What To Do If You Step Over Toad Poop?

Stepping in Toad Poop can be unpleasant, but it is also potentially dangerous. Toad Poop can contain harmful bacteria that can cause infections. If you step in Toad Poop, it is important to wash your slippers, hands and feet thoroughly with soap and water. You should also disinfect any shoes or clothing that came into contact with the Toad Poop. By taking these precautions, you can help to protect yourself from potentially harmful bacteria. 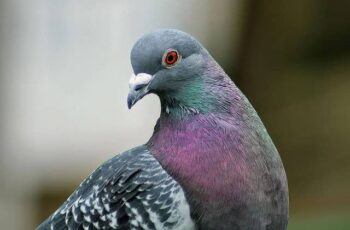 There’s something special about pigeons, isn’t there? Maybe it’s their … If you live in an apartment or even a single-family …