Most people know about skunks but do you know what do they eat? Do they eat meat? Or vegetables? Here’s the answer.

Skunks are nocturnal omnivores which means they eat meat and plants but mostly meat. Particularly, 70% meat and 30% plants and other stuff. Their diet is more of seasonably available prey like insects during the spring and summer and small animals in the fall and winter. But that doesn’t mean they don’t eat plants. Wherever they find, they will eat fruits, leaves, grasses, eggs, leftovers, mushrooms, vegetables, and maybe even chocolate just like raccoons. They are not limited to a single food family, they can eat almost anything they come across.

Skunks are small, cute furry animals with incredible features. As little as they are, skunks are resilient survivors that live almost everywhere in the world except the Arctic. But how do they survive? And what makes them survive?

These notorious little mammals are excellent foragers that consume a wide range of food sources. Like many urban predators, skunks are opportunistic omnivores and will take a quick snack from the bin or from the small animals around. No matter what and how it is, skunks won’t miss the chance to fight and hunt prey even snakes.

And when there is little or no prey around, they will stick to their foraging skills. They will eat whatever they get including birds and pet food. But do they also prey on your pet and does their diet include your pet itself? Let’s find this out.

Do Skunks Eat Meat or Plants?

While skunks are omnivores, they eat both meat and plants but mostly meat. In fact, they eat everything that seems edible to them and invade mostly tiny animals and insects to have their meal. Their diet change with food availability and seasonal changes taking more arthropods in the summer and more fruits in the autumn and winter.

In summer, when there’s meat available, they prey on rodents and small animals. But in winter, when little to no preys are available, they survive on the fruits and plants in addition to relying on their fat reserves built up specifically to endure the winter season. With that out of reach, skunks will try the trash and garbage finding food.

They have a flexible diet that can eat every type of food and their metabolisms embrace them as well. They are a small predator that can’t prey on large animals but that doesn’t hold them back from defending them. In addition to their other weapons, skunks are equipped with a strong spraying mechanism to restrain evil animals. The odor of the spray is extremely intolerable which leads the predator to go away and leave the battle with the skunk.

What Do Skunks Eat?

Unlike squirrels, skunks are nocturnal omnivores. During the day, they will rest in burrows. Skunks have strong claws, they can use to dig out these burrows or they will move into a burl that was dug by someone else. At night, they will forage for food and eat depending on the season and what’s available. Though not very picky, they prefer meat over plants and prey on small dangerous animals especially in the wild.

Skunks eat species humans consider pests like insects and rodents like bees, beetles, crickets rabbits lizards, birds, scorpions, snakes, moles rats, mice. That’s why some people love keeping skunks either as a pet or as a pest control facility, especially in rural areas. These stinky animals have sharp teeth and claws that can tear their prey into pieces. Although they do not have very strategic hunting skills like prairie dogs, they are good at fighting and kill their prey very easily but not large prey.

Large prey that has hard skins and hard meat cause damaging its teeth and its inner system. But that doesn’t mean they don’t prey on relatively larger animals than themselves.

While plants and small animals are only accessible in the summer so they will forage food in the garbage and decaying organics.

Preying on insects and other small species, they are mostly found in the garbage. Not only that, they will find more than just insects there that mean leftovers.

Skunks also feed upon the fossils of plants and animals that are dead. Since skunks are omnivores, they can also consume decaying organics. This is a pet peeve for humans that how skunks also sneak into the houses and search for decaying plants and food to make their tummy satisfied.

Assuming 70% of skunk’s food contains meat, skunks like to eat small animals the most especially bees and beehives. In fact, skunks often attack beehives because they eat honeybees.

When they aren’t accessible, skunks will eat plants and fruits, and vegetables. And if none of those are reachable, they will eat from the garbage that is very risky for their health. And as well as, they will always use compost piles, bird feeders, and pet food without exception.

Does Skunks Diet Include Your Pet?

Not really. Unless you keep birds, chickens, snakes, mice, rabbits as a pet, you are all good. If you do so, you may want to keep them with yourself everywhere you go and keep them inside for more safety.

Do Skunks Spray on People?

Nope, unless you agitate, try to catch or kill it. Skunks are well known for their stinky odor but this is typically used as a last resort to avoid predators. These furry mammals are friendly by their nature and come across humans very well especially if fed and loved by us. But that is the only happy side of things and if you decide to become its enemy or predator or catch, you will encounter it badly.

After the skunk is alarmed, first they will hiss, stomp, do handstands, puff out their tails and even climb trees in order to keep predators away and only spring if they have to.

They will emit just a little bit of musk to give off a smell. Which is basically a warning sign that says “Mess with me and you’re gonna get the full dose”. If the skunk is threatened more, it will project two streams of musk out on the attacker.

It also takes days for skunks to recharge their spray tanks which can leave them vulnerable to attacks. Skunks predator includes coyotes, foxes cougars, badgers and birds of prey and they are most vulnerable during their first year of life.

Are Skunks Fatal or Dangerous?

Nope, unless you do not threaten skunk, they won’t attack nor spray. In some cases, however, which skunks have sprayed or bitten some people, it didn’t cause death. It might injure severely but if you manage to catch up with the right treatment, you shouldn’t even suffer from it badly.

Absolutely not. Eating meat might put you into thinking skunks eat humans meat too, just like other wild animals do. But fortunately, no, they do not eat humans meat neither other skunk’s meat. Unlike most wild animals, skunks do not prey on humans or prefer to eat humans. Their prey is only small animals and plants and fruits. Other than that, they won’t prey on large animals or humans.

If you thought knowing about a skunk looked like fun, make sure to find out about skunks doing these things. 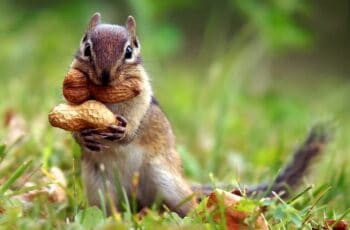 Surprisingly, squirrels are actually quite talented when it comes to …