As cute as rabbits are, they are also very attractive to predators. These little animals are prey for many ground and aerial animals and one of those vicious predators is raccoons. Whether you’ve chickens, rodents, or even cats, raccoons are predators to consider. Raccoons are omnivores and they eat everything they get. More importantly, raccoons are nocturnal and mostly hunt at night. Their food includes parrots, pigeons and birds and pets food, birds itself, and everything else there. But what about rabbits, do raccoons eat rabbits? Let’s find out.

As raccoons are omnivores, they mostly eat plants and small animals like fish, frogs, lizards, insects, nuts, fruits, vegetables, mice, chickens but rarely eat rabbits. Raccoons are primarily after easy food, in which case, rabbits aren’t the easy hunt for them. Instead, they find easier food like pet food, seeds, bird’s food, birds itself, chickens and even food waste inside the trash. While raccoons have been significantly eating chickens, they haven’t been able to eat rabbits much.

The reason is chickens are far easier to hunt than rabbies. Chickens are slow, defenseless, and easy meals but rabbits are fast, hides well, and hard to catch so raccoons can’t catch rabbies. But that doesn’t mean raccoons never eat rabbies. Raccoons are intelligent than rabbies so they pursue, look after rabbits and when possible, (in a cage, in a nest, or in burrows) they will definitely hunt it.

The short answer is raccoons do eat rabbits when they get, but since rabbits are fast, raccoons can’t really catch.

Rabbits are wonderful pets but are also a sweet meal for many predators. Whether you’re keeping rabbits as pets, or just want to know, raccoons are the ones that attack them. Raccoons are undeniably one of the predators that are omnivores but raccoons don’t highly feed on rabbits. Raccoons are always after easy food that doesn’t include rabbits because they are very challenging to catch so they will often skip rabbits for easy food.

From fruits to plants to animals, raccoons eat everything they get including your bunnies. They will eat whatever comes first but prefers meat more than plants. But if they find plants or fruits, they will likely eat it. However, if they find meat only or meat and plants both, they will first eat meat and then plants.

Raccoons are nocturnal so they hunt at night. They are mostly in search of easy food and in this case, rabbits aren’t easy to catch. They always opt for easy hunts like mice, rats, birds, bird eggs, insects, fruits, insects, vegetables, chickens. But if they didn’t succeed in those, it will probably go for rabbits.

A video from Yahoo news shows that that raccoons are taking baby rabbits from their nest and eating them.

The reason why raccoons don’t eat rabbits first is because rabbits are faster than raccoons so they can’t catch it. Rabbies impressive back legs are super powerful that are able to run at an incredible speed of 45 mph while raccoons run 15 mph at the fastest. In addition to the speed, when there’s a predator, rabbits run very zig-zag and jump far up to 10 feet which makes it very difficult for raccoons to even get close to. While raccoons are good jumpers from a height like tree or building but they are not good jumpers from the ground. Here’s how high can raccoons jump from the ground and from height and how far.

Rabbits are also very defensive and can kick, bite, distract, and run at an incredible speed. But raccoons are opportunistic. Raccoons don’t normally run after rabbits when they are out but when they find rabbits in a nest, cage, or in a burrow or somewhere they can hunt, it will probably attack without being seen or heard. However, they will easily hunt and eat baby rabbits (kits) if the mother is out or isn’t near but often the mother is near and defend it. As a result, raccoons will eat rabbits whenever they can but since raccoons can’t catch them so they won’t opt for it at first. That’s the perfect answer to do raccoons eat rabbits.

How Raccoons Hunts Rabbits & Other Animals?

While every animal has its own privileges which they use to hunt with, raccoons’ ability is their intelligence. Raccoons are not fast, strong, or deadly but are intelligent. Meaning they hunt with their intelligence. Raccoons are good at climbing trees, swimming in the water, and has a keen sense of smell. Using their nimble front paws, it collects nuts, fruits, and plants. With these features, they hunt a variety of small and weak animals including rabbits but not primarily at the first.

Raccoons aren’t really after rabbies and search and prefer easy food. Bird’s nests are favorite of raccoons where they get eggs, birds food, and baby birds itself. But that isn’t limited to only bird’s nests, but it can be any animal’s nest, alligators, rabbits, or turtles. Even with half or empty belly, raccoons prefer easy meals that don’t require much effort or fight with, not even with baby animals. And raccoons show the same thing to their babies. Here’s when raccoons have babies and how many. That’s why they hunt small and defenseless animals and eat plants, fruits, and vegetables. That also answers to do raccoons eat rabbits.

Raccoons don’t take risk or effort if they have an easier option of food. But if it isn’t available, they will run for effortful and/or risker options like rabbits that are super fast and far, even faster than cats, and hard to catch. They can’t really catch rabbits chasing after them but raccoons are pretty wise and would trick, fool, deceive or catch in a group. Although raccoons do not hunt in group, they might make when there’s lots of food or difficult prey.

It’s no where easy for raccoons to catch and eat them so they won’t run for it firstly unless they run out of food and no easy food around. If they didn’t find food, they will run for rabbies but they will never chase after them openly and actively. Raccoons are aware that they can’t catch rabbits so they won’t run after. Instead, they will follow, look after and observe the steps and move as close as it can and from the very near and in the perfect position, (maybe when rabbits are sleeping or busy eating, feeding or playing), they will run after and with high chances, they will probably hunt and kill it.

Compared to rabbits, chickens are easy meals for raccoons as they are very slow and easy to catch animals. Raccoons have attacked countless times on chickens and eat brutally. Rarely raccoons attack rabbies due to their speed but attack their kittens and nests when they find their nest which isn’t easy to find. In cities, where there are people and food sources like waste of food in trash cans are available, they won’t bother to attack rabbits. But with no food around, they will head for chickens first, that they are easy but with no chickens and food options, they will go for rabbies after all. Raccoons only attack rabbits when they are in their nest, in a cage, in a box, or where raccoons can catch. Fortunately, rabbits are fewer in those places and more out.

While raccoon’s natural habitat are forests, but narrowing their habitat, raccoons are turning into towns, suburbs and cities just like squirrels. In fact, they are happier and find food easier in cities and their population is now more than ever in cities. Raccoons are good thieves and steal food once they see, without being afraid of humans. Raccoons aren’t like cats or thieves instead, they will fight over food or if you try to hit them. They are wild and attacking in defense.

Displacing into urban areas, raccoons have now easier food options particularly fresh and sweet chickens, food waste, birds food, birds itself, and at the last rabbits. With these many food options, raccoons are unlikely to go for rabbies and that’s why they rarely hunt rabbits.

They are the next version of cats but even wiser than that. In addition to it, raccoons are excellent problem solvers and can open locks, jars, caps, or covers and solve problems. Their nimble paw works like a hand and helps them in every operation. Raccoons are equipped with sharp night sight and hunts, steal, and are active at night. These features allow them to hunt animals, in response to do raccoons eat rabbits

With over 200 sounds, raccoons do advanced communication and 12 – 15 different calls. Despite raccoons are fearless and lonely predators, when they are under attack they fight and scare away the threat by growling biting, and scratching in a group.

How to Protect Rabbits From Raccoons & Wild Animals?

With so many predators, it’s might seem difficult to keep rabbits as pets, or as fun. Assuming you’ve rabbit pets, there are far less predators in the city and urban areas. The amount of predators is significantly less in the urban areas, however, due to less food and less space, more and more wild animals are moving into towns, cities, and suburbs, so protecting rabbits, pets and chickens is becoming difficult than before.

One of those displaced animals is raccoons. Raccoons aren’t to be underestimated and they will always hunt rabbits whenever they can. No yard or cage is completely safe despite its claims. With that though, putting rabbits in a cage isn’t a good idea. Rabbits require plenty of space for playing, exercising, and moving around. You can probably let rabbits free indoor but you will need to also let it open outdoor at least for some time. In this case, you will need to take some steps. Here’s how to protect rabbits from raccoons and wild animals.

The best and most effective solution is to free up and consider a space of a room or two in your yard for rabbies.

Next, fence and wrap up and the area with one-inch hardware wires all sides, (better electrify). This should be done all around the space that will give rabbits plenty of space for playing while protecting from predators. It may still be open for air predators however, aerial predators are mostly in the wild.

Another reason why raccoons attack or might attack your rabbies is due to food rabbies or other pet food that eventually puts rabbies itself as food for them. Never put food for rabbits or other pets outdoor all the time. Instead, you can feed into a safe place that can be indoors.

Rabbits are most active in dawn and dusk which is when raccoons are also active. In this case, you can also take another step and electrify the wires, which is a little bit risky for you or your family but can potentially help rabbies save from raccoons. However, at night, it’s best to move rabbits indoors as raccoons and some wild animals are active at night. There are not completely safe cages but if there’s supposed to be one, raccoons will soon figure out how to open it. They use their nimble paw even to open locks. That was all to do raccoons eat rabbits. 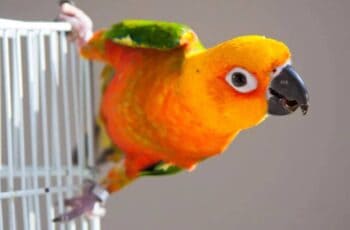 Believe it or not, birds experience hormonal changes as they … Some people swear they’ve seen a squirrel snatch up a …